Skala is a village on the southeastern coast of Kefalonia which has developed into one of the major holiday destinations on the island. Yet it retains a village feel despite being very popular with tourists and locals, especially in the busy summer months of July and August.

The 'new' village of Skala on the beach was built in 1956, after the devastating earthquake in 1953.

Skala in Greek means 'Ladder' or 'Stairs' and the old pre-earthquake village of Skala was located in the hills you can see at the back of the resort.

Around 3.5km from the main high street and up a steep hill a steady 50-minute walk leads to old ruins of traditional Kefalonian houses, former churches, an olive press frozen in time, an amphitheatre and a tavern with magnificent views of the south of the island and the channel over to Zakynthos.

Getting there by foot makes a lovely walk, as you can take in the views and ruins as you climb. Alternatively, take a taxi – around 10 euros and walk back down.

Be careful if taking the road with a hire car as it is narrow in places and parts of the road are very weather-worn. You can find the amphitheatre by taking the road behind the tavern and walking for around 1 km, it is past the old ruined church of Old Skala on the right by the modern tennis courts.

Skala is home to a traditional Roman villa which is worth a visit. It can be accessed near to Homer’s Steps (opposite Bar Akri). Entrance to the attraction is free, but occasionally the gates can be locked. Generally they are open 10am to 3pm daily.

Access is via a steep ramp or steps, so not great for the less mobile, especially closer to the villa as the path is stony and overgrown in parts.

There is a steel walkway constructed in an elevated position around the villa, giving you a great birds-eye view of the main floor which has been very well preserved. There are several rooms that you can see, many of which have stunning mosaics, picturing various Roman artefacts.

There is a second archaeological site outside the centre of Skala, around 3km away in the direction of Poros. Next to the St George (San Georgio) church, another excavation has discovered remains of a Doric temple which date from the end of the 6th century BC.

The central square is the social hub of any village and Skala is no different. Early evenings draw families here to play – rememeber the children finish school earlier here and often play out until late, while the parents and 'gia gia and papouse' (grandmother and grandfather) proudly watch the generations playing. There are benches and seats to sit and watch the world go by.

A fully functional church in the centre of Skala – numerous religious services are held here throughout the year, Easter being the most spectacular celebration. There is a regular weekly Sunday service at 9am.

Skala boasts a beautiful sandy beach, over 3km long. It shelves into the sea, with pretty pebbles dotting the shoreline. The crystal clear waters are great for swimming, and you can almost always be guaranteed a spot even in the hectic months of high season. 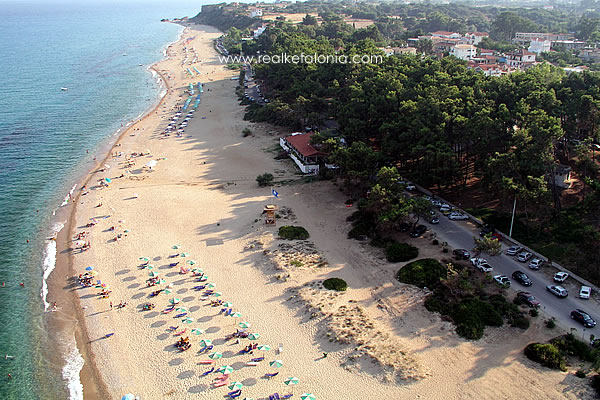 At the far end of Skala – you have Spithi Beach. If you do not mind getting wet, you can clamber around the rocks here and get to Loutraki Beach, and from here on to Mounda Beach.

There are several other beaches accessible from the Skala area and many coves to explore.

A beautiful cove for the brave and bold!

This  is a small secluded cove, popular with Italian tourists. Head out on the main road to Poros, and as you come down the second hill, there is a crash barrier on the right hand side, and a deep gorge to your left and right. Hop over the barrier and follow the trodden path down – it should take you around ten minutes to climb down.

Trainers or sensible footwear are highly recommended, as well as a beach umbrella and some basic provisions such as water and some snacks. Once down there, you can swim around to the next cove, or just enjoy the crystal clear Ionian Sea lapping at your feet. This spot is perfect for snorkelling!
This is a great video of the path down there!

Along the coast in the other direction, around 3km away, you have the sandy beach of Mounda, also known as Turtle Beach, another haven for the nesting caretta caretta turtles.

This beach gently shelves into the Ionian with great views of Mount Ainos and Zante. If you are feeling adventurous, when the tide is out you can scramble across the rocks to Katelios, not recommended for small children as it can get very steep in places – but passable with care. In the high summer months, there is also a marked path (blue/green plastic markers) taking you above the rock line – but again – care must be excercised.

Limenia Beach is one of my favourite beaches in the area. It's around 8km out of Skala, located just after Kako Lagadi on the way to Poros.

This beautiful stretch of beach has the clearest water I have seen. The beach itself is protected by the headland and is uncrowded, even in July and August.

The pebble beach gradually slopes down to meet the water. There are plenty of rocks around this part of the sea, so they attract all kind of sealife – great for keen snorkelers.