Sami is a working port town, the second largest port on the island after Argostoli. The wide streets lined with Venetian buildings are set back from the waterfront, home to many cafes and tavernas.

The nearby ferries leave on their journey to neighbouring Ithaka and also to Patras on the Greek mainland. Fishing boats and exclusive yachts belonging to the rich and famous from all around the world can be seen floating in the harbour, as well as the tourist craft for hire and day trips.

What Sami lacks in shopping, it makes up for in village charm and views. The modern village of Sami is in contrast to the ancient village and Acropolis, both of which are worthy of a visit.

The old village can be discovered around 3km above Karavomilos, just on the outskirts of Sami. However, there is no sign of life here at all - all down to the 12th August 1953, the earthquake that changed the geology of Kefalonia forever.

Today stands a ghost village, with abandoned and crumbling dwellings and churches. You can wander down the narrow gaps between the houses and marvel at how life used to be. In early August, the ‘Saristra Festival’ is held here, a new age art festival with music, poetry and lectures.

There is also an old tree full of ribbons in the centre of the village. My opinion is that this is a memory tree and people tie a ribbon here in memory of a loved one. The sight is quite overwhelming.

The peak above Sami, known as Lapitha Mountain, houses the ancient acropolis. A rough road will take you to the summit, where there are views over the village and surrounding areas.

It developed into a powerful town and its location on top of the cliff gave it many advantages. Homer makes reference to Ancient Sami in his poem 'The Odyssey'.

In 188 B.C, Sami fell to the Romans and lost its autonomy. However the town prospered due to increased trade and population. Building continued in the town, and excavations revealed a stronghold built during Hellenistic times, and walls from the Cyclopean period. These walls show evidence of 22 doorways or entrances, an ancient theatre and luxurious tombs that can be dated to the 3rd century BC.

The ruins today make an interesting visit with signs offering explanations in English & Greek - if you can tear yourself away from the stunning view for long enough.

The monastery is perched high on a hill as you enter Sami from the direction of Poros (follow the directions to Anti-Samos). The views are endless and you can see neighbouring Ionian islands on clear days, along with a panoramic view of Sami and Aghia Efimia.

The monastery was built in the 18th century after two shepherds found an icon of the Virgin Mary (Panagia) in 1722. Saint Cosmas of Aetolia (1700-1779) was believed to have stayed at the monastery during his visit to the island.

Today the monastery is open to the public, and you can enter through the gates to take a look around. The orginal icon found by the shepherds has been made into a larger icon of Panagia Agriliotissa. They do close in the afternoon for siesta!

The monastery celebrates the feast of the Panagia on 15th August, and also a panagiri (festival with music and food!) is held to commemorate the memory of Father Kosmas on 24th August, highly recommended if you wish to embrace the local culture.

This is the end of the water phenonomen in Kefalonia - the point at which the water from the other side of the island makes its journey back in to the sea. You can literally see the water bubbling back into the sea here.

It is possible to walk around a pretty lake with local resident geese. With its sea front location  and lush vegetation, beautiful church and small garden area, it is a perfect place to while around the hours.

There is a restaurant next door with views across the sea to Ithaca, perfect for grabbing some refreshments when required, or take a stroll up towards the Ionian Emerald Hotel for a wider choice of tavernas. You can stroll along the beach front here to the hotel or opt for a walk along the road.

In this area, you will find one of Kefalonia’s most popular attractions, Melissani Lake. The lake part of the strange water phenonomen on the island. The lake is underground, and was discovered by Yiannis Petrocheilos in 1951.

During the first excavation of the cave, an ancient lamp was found and is on display in the Archeological Museum in Argostoli. Further excavation in 1962 discovered several important artefacts from the Minoan culture.

Melissani is referred to as the cave of the nymphs - the cave was named after a nymph called Melissanthi.

Melissani Lake is very popular with tourists. Once you have made the short descent to the underground cavern, you explore the two caverns by boat. The boat guide/ gondolier explains the history of the cave in English and Greek and will expertly sail you through a narrow and shallow channel next to the area of the roof collapse.

It is a great experience and the best time to visit is midday when the sun is overhead. The access to the underground cave is via mainly a slope with a roped hand rail. Entrance fee for summer 2016 was €7 per adult. 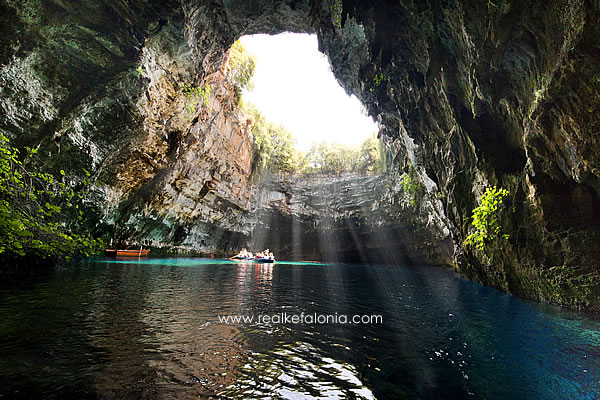 Also located in Sami are the historic limestone Drogarati Caves. The attraction is 60 feet below ground and is only accessible by steps, around a 100 of them cut into the rock.

The temperature in the cave is a constant 18 degrees all year around and the escape from the heat is very refreshing in the height of the summer.

There is a clearly marked path around the exterior of the cave (can be wet and slippy in places so please take care).

Rumour has it that the caves are 150 million years old and the natural stalactites and stalagmites have formed from rainwater filtering into the cave. They grow at around 1cm per 100 years.
The caves here at Sami were discovered only 300 years ago when a strong quake uncovered the entrance. Cave experts have discovered that the cave is bigger than the area open to the public and they think that it is connected with other caves in the area. 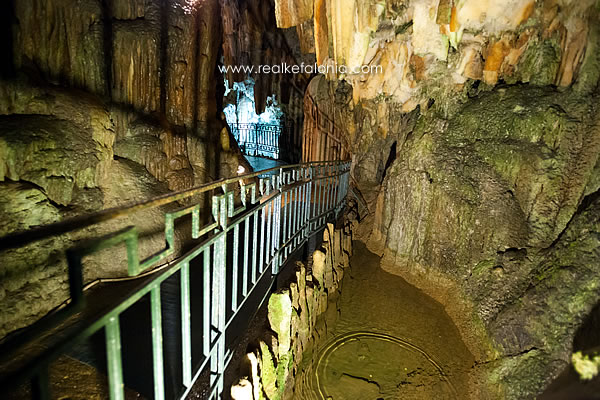 Anti-Samos beach is a short drive from Sami – take the road to the right and follow it around – the road is single track in some places. There is a perfect lookout point along the way to the  beach and the road allows you to pull over to take a photo of the stunning emerald green waters from above.

The beach itself has an ample car park, (gets very busy high season!) and a couple of trendy beach bars, one of which held the Ministry of Sound festival a few years ago. The beach itself is pebbly, so beach shoes would not go amiss. There are sunbeds available near the bar areas, usually free if you purchase drinks and snacks from the bar -  but you can chose to take your own parasol and towels and visit the far end of the beach. Water sports are also available.

The water here is crystal clear but also very deep just a short way from the shore line. Take a mask and snorkel and spot a variety of underwater creatures.

Hire a pedalo or kayak – it is a great way to explore the coastline for an hour and have a closer look at the yachts moored out at anchor – you never know who you may spot! 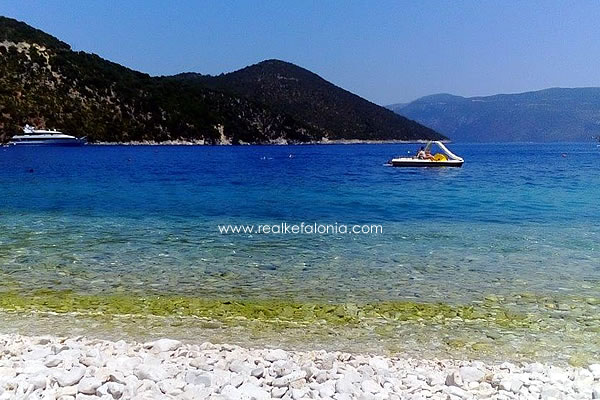 Beaches in Sami are mostly shingle. The beach runs from the port and along to Karavomilos. The better beaches in this area are outside of the village at Anti-Samos (described above) and at Agia Paraskevi. The drive around to neighbouring Agia Efimia is sprinkled with shingle coves that will make you want to pull over and descend into the crystal clear water for a refreshing swim!