Argostoli is located in a protected position on the western side of Kefalonia away from the open sea on the shores of the Koutavos lagoon.

Most of the accommodation is conveniently located in the town itself, which was totally rebuilt in the Fifties following the major earthquake.

Argostoli can actually claim to be a former 'pirates' lair'. Bandits hid out on the finger of land around the present-day town and used the natural harbour as a base while they preyed on shipping around the Ionian Sea.

Later the Venetian rulers built a small church and a settlement grew up around the port, which was the trading point for the then hillside capital of Aghios Georgios.

The capital moved down from the hills in the 18th century and became a bustling provincial trading centre.

Argostoli was badly damaged in fighting between Italian and German troops towards the end of the Second World War (the events covered by the Hollywood film Captain Corelli's Mandolin) and then mostly destroyed by the major earthquake which hit the island in 1953.

Reconstruction followed, aided by a number of other countries, and the town was rebuilt using the former layout and, in many cases, in the former style of architecture.

Nowadays the town of 13,000 inhabitants is a lively summer destination and accounts for a third of the total population of Kefalonia. 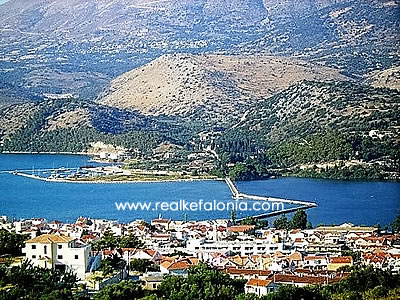 This popular square is the heart of the capital and is a meeting place for most of the events in the capital, including the great Carnival Procession in the spring where an array of colourful and impressive floats pass through the square from the various villages in Kefalonia.

In the square stands a statue of Panagis Vallianos (1814-1902), born in a village outside of Argostoli, he was a Greek merchant and ship owner, dubbed as the 'Father of Modern Greek Shipping'. His business was extremely successful and helped other companies to trade and ship goods. He donated money to Saint Sophia’s Cathedral in London and also to the Greek Orthodox Cemetery in West Norwood, London where his remains lay. He also left a legacy to charities on his home island, Kefalonia.

The square is surrounded by palm trees and has a vibrant atmosphere with its trendy street cafes and restaurants.

The main street of Argostoli is the Lithostrato, with its cool white marble pavements (careful though, as it can be very slippery after a shower).

The Lithostrato is the main shopping area of the town and hosts a whole variety of tourist shops, and some trendy street cafes. There are churches and hidden alleys along this pleasant pedestrianised walkway, which make for some great photo opportunities. 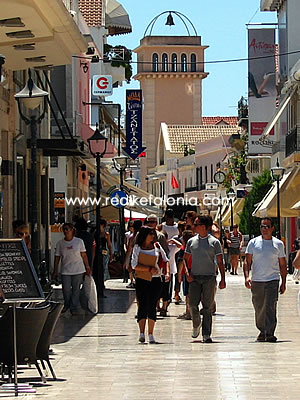 The Bust of Nikkos Kavvadias

Known as the poet of the sea, and a famous Greek sailor. His bust stands proudly on Argostoli harbour front. His travels and adventures around the world at sea were used as powerful metaphors for means of escape for the 'ordinary people'.

He died of a stroke in 1975, after returning from sea for just three months. Posthumously, his poetry was used by a Greek singer, Thanos Mikroutsikos, from Patra just across the water from Kefalonia, who released an album with music set to the poetry of Kavvadias.

Argostoli enjoys a well protected location on the island and adjoins the Koutavos Lagoon. The lagoon itself many many years ago attracted mosquitos and so malaria was rife. Although this was eradicated on the island, eucalyptus trees that were planted as a deterrent to the little biting pests still stand in the marshy areas of the lagoon. There are many species of bird here that can be found, from swans to the less common grey flamingo!

This lagoon eventually meets the sea and is home to a whole host of wildlife, including the resident Caretta Caretta Turtle. Just past the fruit market on the harbour front, alongside the fishing boats, you can spot the turtles freely swimming at around 10.00 – 11.00 in the morning.

This is when the trawlers arrive back to the harbour to sell their goods direct from the boat and sometimes the turtles get fed tidbits from them. (However, please do not feed the turtles yourselves.) There is often a member of the team from Wildlife Sense standing nearby to answer any questions you may have. 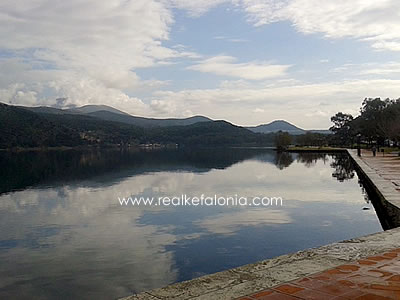 The Drapano Bridge is a beautiful stone bridge, constructed over the Koutavous lagoon. Re-opened in 2016 it is now only accessible by foot.

It makes a lovely walk across the lagoon and is just short of 1km in length. The water of the lagoon is very shallow as you can see when you pass, and you may even spot a turtle as you walk.

The bridge has archways and allow the turtles to pass under the bridge to the more tranquil south of the lagoon.

Colonel Charles Philippe De Bosset was commissioned by the British Army to oversee the construction of the bridge, which has a very colourful history.

The bridge you see today is not the original structure. The first bridge was built in 1812, and was made out of wood, and at the time, plans met much disapproval from local residents, who saw it as a potential aid to invasion of the town.

However, the alternative route around the lagoon was over 5km, and so the bridge was built, in just two weeks. In 1842, the bridge was rebuilt using stone. An obelisk was constructed around half way, a white stone monument and mounted on it was a plaque with the words "To The Glory of the British Empire".

The obelisk was built as a tribute to the work the British did on the island after the war had ended. When Greece regained her independence in 1865, just one year after British rule had ended, literally overnight, someone went to the trouble of removing the plaque - who it was remains a mystery to this day.

In 1953 part of the bridge collapsed during the earthquake and so was partly rebuilt. The bridge was used by cars and pedestrians up until 2005, when it was closed to traffic for repairs. The bridge was then entirely closed in 2011 until repairs were finished and it was finally re-opened in June 2016.

This museum contains interesting artefacts discovered all around the island from prehistoric periods. The original museum was destroyed by the earthquake in 1953 but was rebuilt in the Sixties. Items on show include 12th century treasures such as jewellery and gold artefacts from the Mycenean era. It also contains finds from Melisanni Lake, where the God Pan was believed to be worshipped by the deities. The museum is located next to the Municipal Theatre on Vergoti, just off the main Valianou Square. It is open from Tuesday to Sunday.

An interesting collection based on the everyday life of Kefalonia, with clothing, furniture and carvings. Not to be missed is the collection of photographs from before, after and during the earthquakes which demolished much of the town in 1953. Open from Monday to Saturday. Closed in November.